Our Jeeps are not just a vehicle – they are a tool.  They open up doors for us in ways that we never thought possible.  They are the ultimate exploration machines.  But one huge flaw in the Jeep as it comes is the lighting or, rather, the lack thereof.  Night exploration can easily take a wrong turn when you can’t see what is ahead of you.  In this article I walk through the installation of a set of Quadratec Stealth LED Headlights in our 2014 JK and provide my evaluation of the product.

When the JK was first purchased I didn’t really realize how bad the headlights actually were.  At the time I still had sealed beam headlights in the XJ and the JK lights, especially when used in conjunction with the factory fog lights, were definitely better than those.  They weren’t as bright as the Delta Quadbars in the TJ but then again I didn’t expect them to be.

Eventually, the XJ was equipped with a set of Trucklites and the difference was, well, night and day: 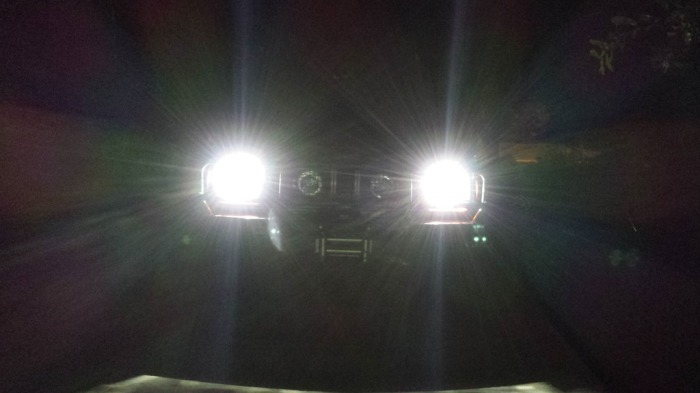 The LED’s were a major improvement over the sealed beams and I was most impressed by how much brighter they were than even the Delta Quadbars.  Their brightness also made me realize something important – the JK stock headlights are awful.

When headlight shopping for the JK, I found that the options available are essentially the same options as for the TJ which makes sense…they’re both 7 inch round headlights.  Prices ranged anywhere from $50 for upgraded H13 bulbs to $800+ for some makes of LED lights.  I knew I didn’t want to stick with halogens, at least in the stock housings, but I also didn’t want to break the bank for a set of super high-end LEDs.

Ultimately, my choice came down to two options:

Let me preface this by addressing one over-arching question:

“Are Trucklites worth the money?”  Answer:  Yes, every single penny.

You may now be asking another question:

“Are Quadratec LEDs a reasonable alternative for the price?”  Answer:  That is what we are going to find out…

As you may have figured out by now, I decided that I was going to try out the Quadratec LEDs on the JK.  It is a black Jeep and I didn’t really want the “murdered out” look by pairing it with black headlights.  I like the subtle look that the Stealth version of the Quadratec LED offers so I shot Rick (username on Jeepforum: ‘Quadratec’) a message to get a price quote.  Side note – if you ever are going to order something from Quadratec check with Rick first.  He can probably get you a price you can’t refuse.

A few days later the headlights arrived.  Packaging gets the job done…the kit also came with a super nice installation guide and the anti-flicker harness in it’s own separate bag: 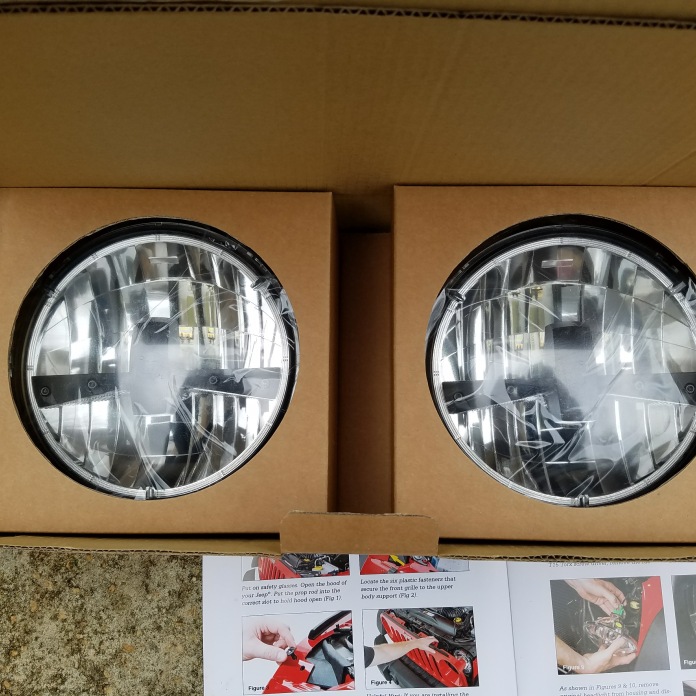 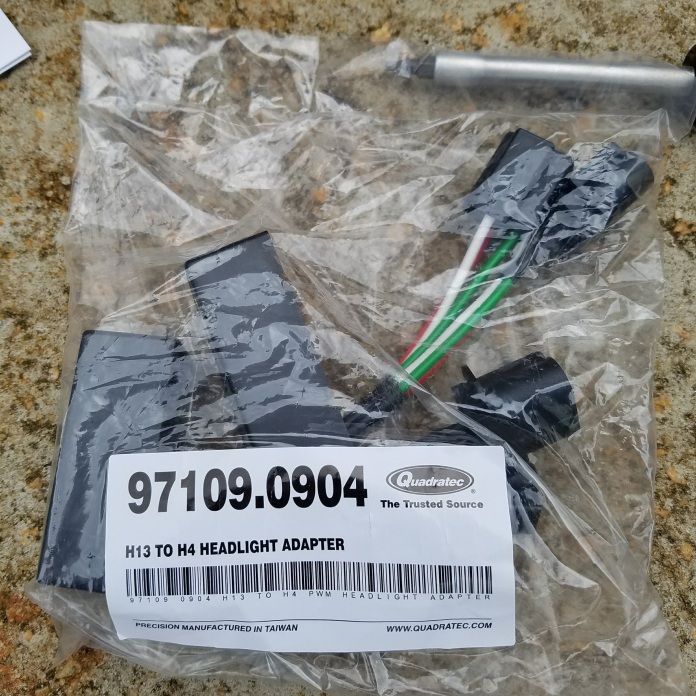 First things first – gotta get the factory junk off.  For some reason, Jeep decided it was best to have to remove the whole grille to change the headlights.  Luckily, that same idiot engineer made grille removal a piece of cake.  When you lift the hood, you will see 6 plastic clips  across the top of the grille (2 are shown in the pic below – on the far left and in front of the radiator cap).  Using a flathead screwdriver, lift up the center section of these clips until they pop out and then you can grab the entire clip assembly with your hand and pull off: 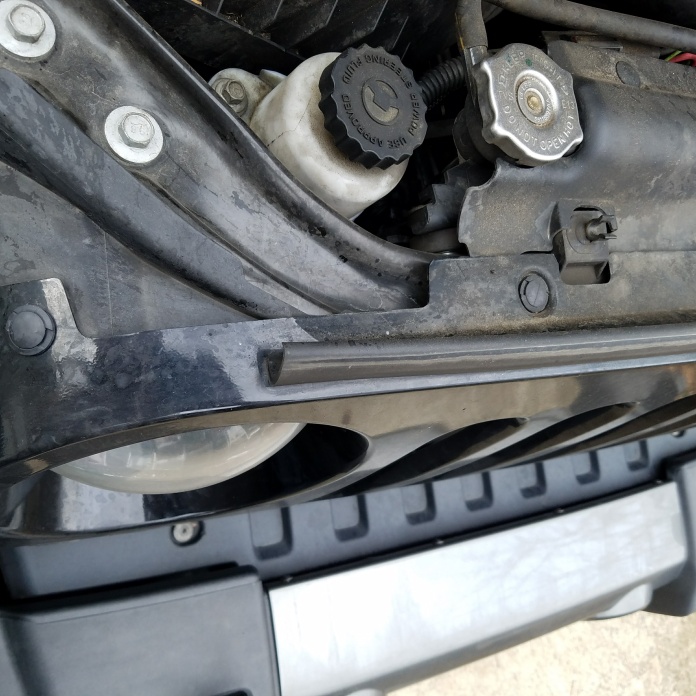 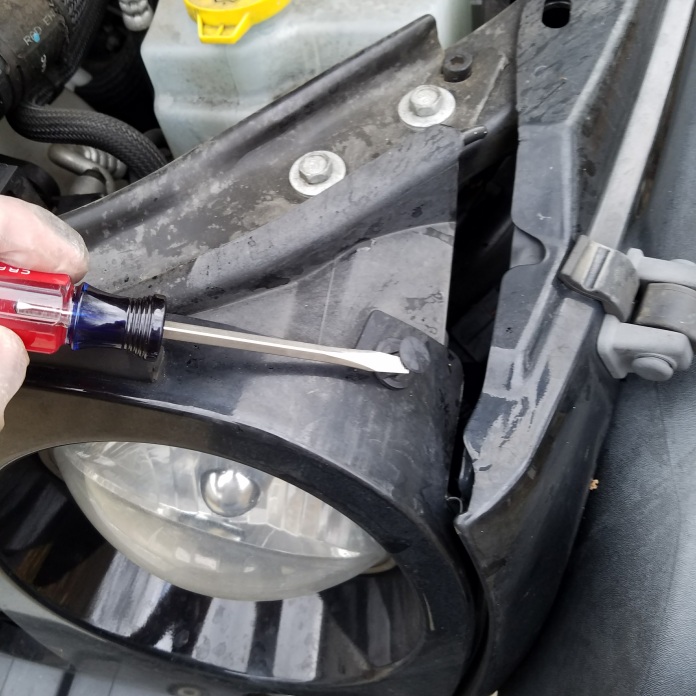 With all 6 clips removed, it is now time to remove the turn signal bulbs.  Simply rotate the bulb assembly/wiring harness 90 degrees downwards and it will pop out from the housing: 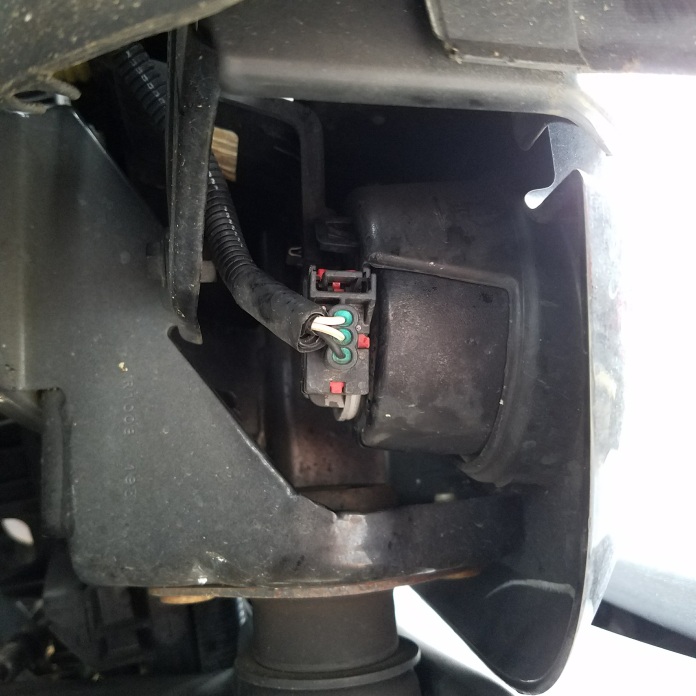 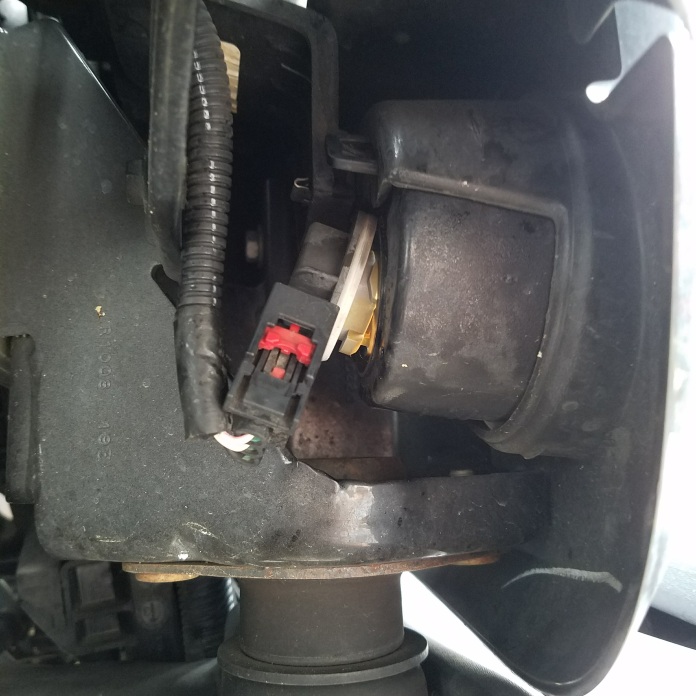 You can just let the turn signal bulb assembly hang loose during the install.  Now, start at the top and pry the grille off.  There are some clips at the bottom but it should pop right off without any tools needed.  You will end up with something that looks like the evil furnace from Home Alone: 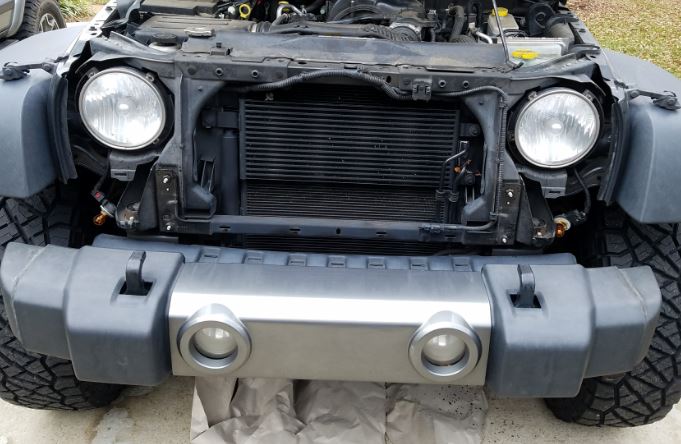 With the headlights now accessible, it is time for them to be removed.  There is a stainless trim ring around each headlight that holds the lights in place.  Using a T-15 Torx driver, remove the mounting screws and the ring and headlight can now be pulled out: 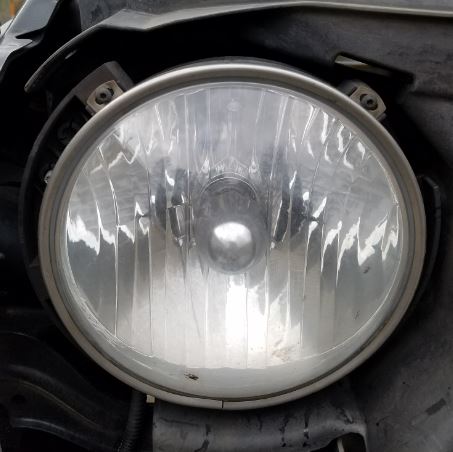 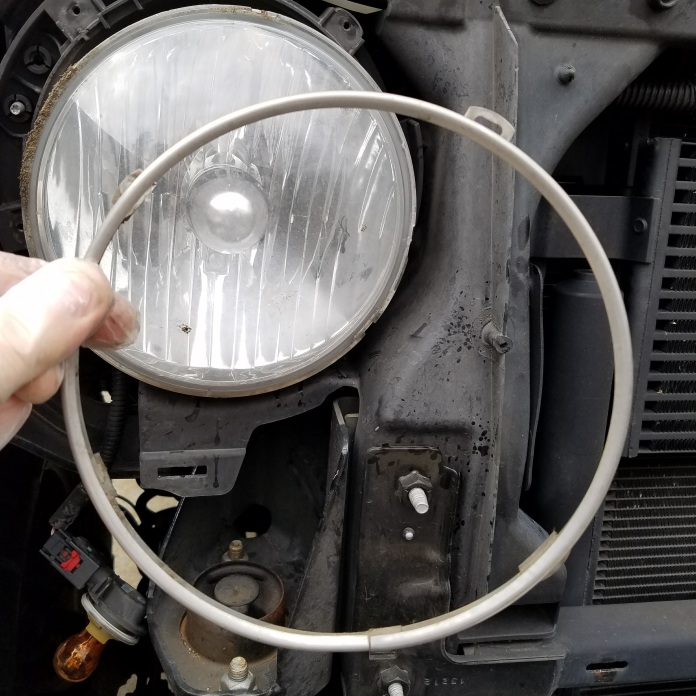 Gently pull the light out of the mounting location to reveal the harness plug.  Using a flathead screwdriver, push back on the red locking clip until it disengages.  The light and wiring plug can now be separated.  Set your factory light assembly aside, or just throw it in the trash. 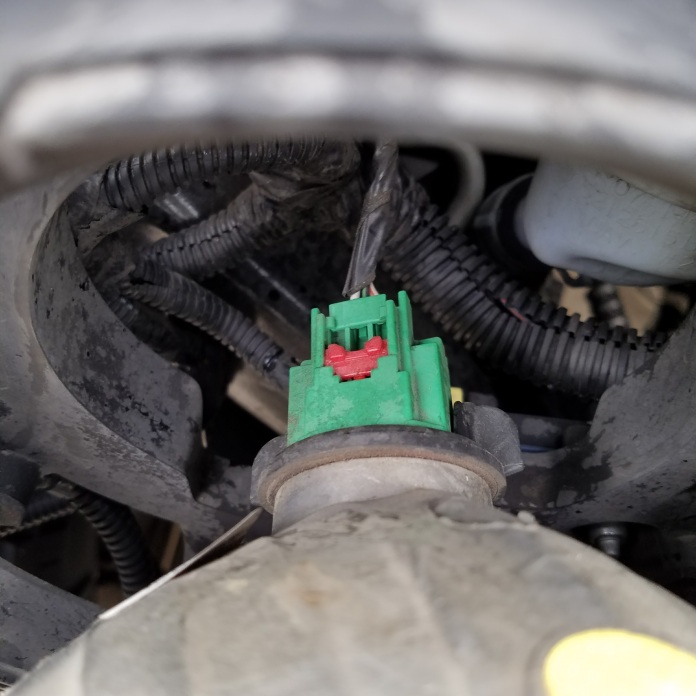 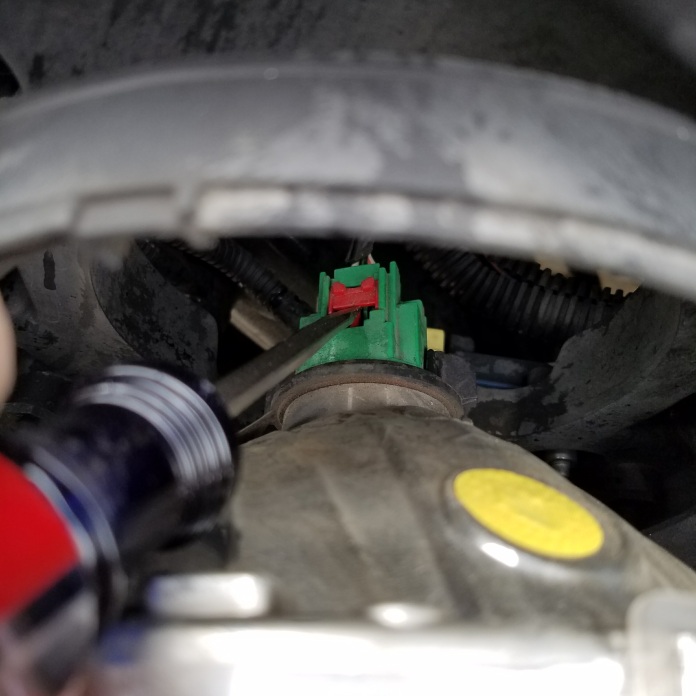 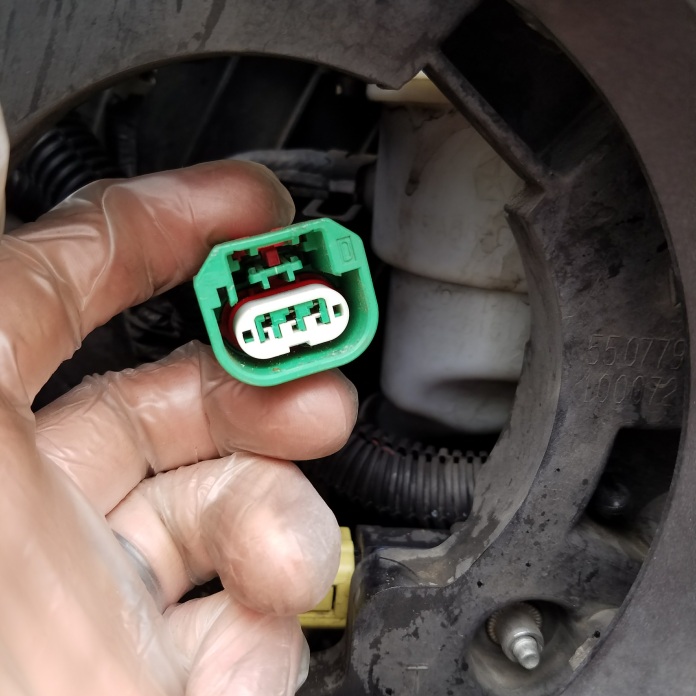 With the factory junk removed, it is now time to install the new Quadratec LEDs and begin reassembly.  My only real complaint about the Quadratec kit is that it did not come with any Dielectric Grease to install on the harnesses.  This grease acts as a water barrier on the terminals and keeps moisture from corroding the wiring of your new headlights.  Luckily, I had some leftover from my Trucklite install on the XJ.  If you are doing this installation yourself you can pick up a bottle of the grease at any local auto parts store.  Liberally apply the grease to the connection terminals on the factory plug, anti-flicker harness, and the new LED headlight and then plug everything in: 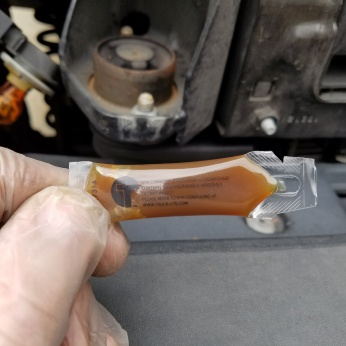 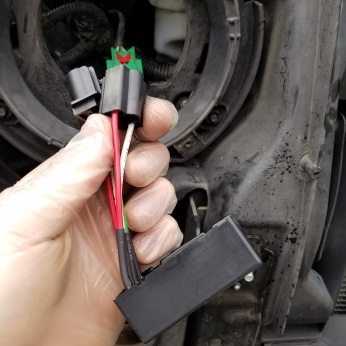 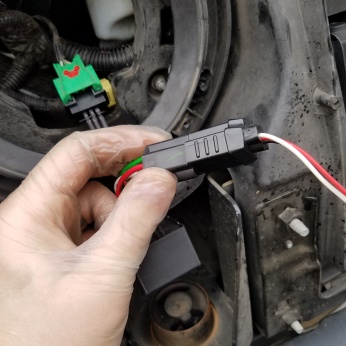 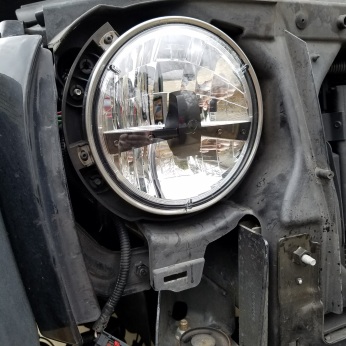 The anti-flicker harness is just tucked in behind the light and out of the way.  Once plugged in, simply place the new headlight in the mounting location and fasten using the stainless trim ring.  Repeat the process on the other side and you will end up with something like this: 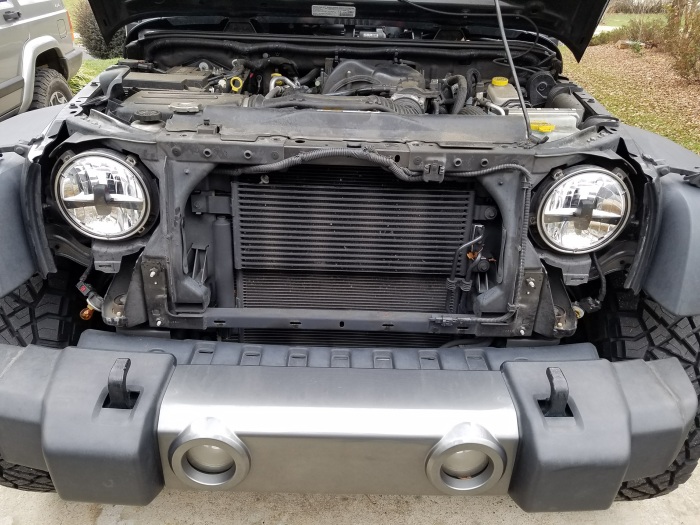 Now, reinstall the grille using the 6 top clips and make sure you plug back in your turn signal bulbs.  See below for a nice before and after comparison of the stock headlights (top) versus the new Quadratec Stealth LEDs (bottom): 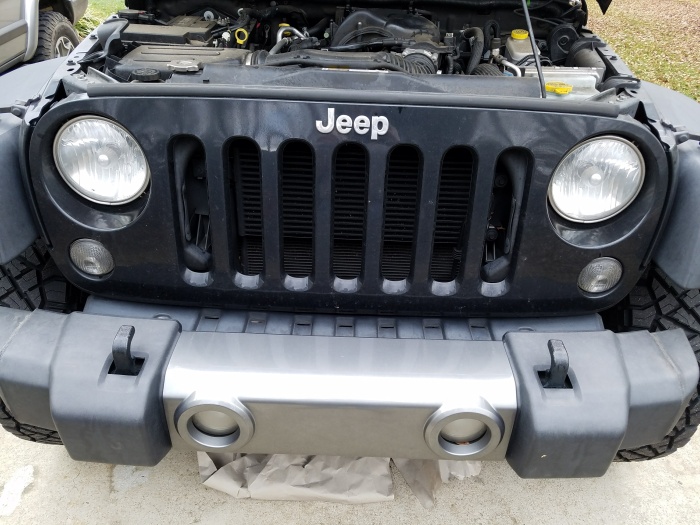 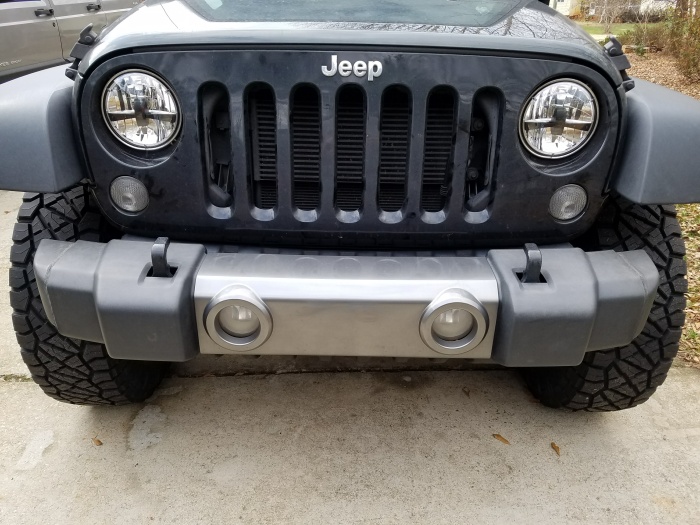 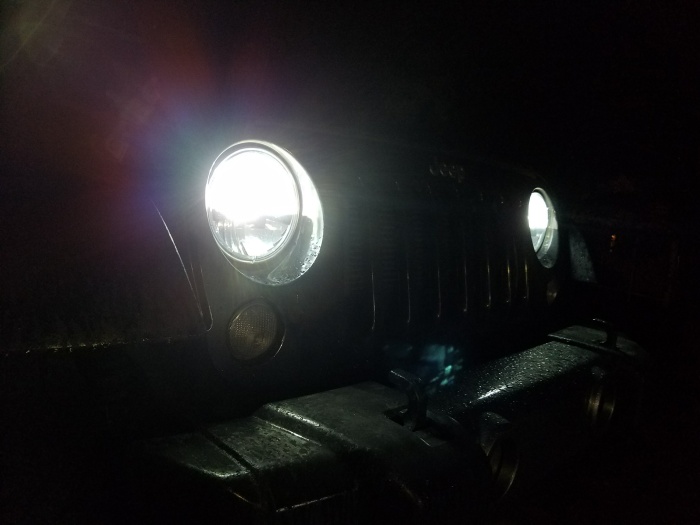 Now, the million dollar question – Are they a reasonable alternative to Trucklites for the price?

Answer:  Without hesitation, yes.  These lights are extremely similar in output to my XJ’s Trucklites and they come in at a fraction of the cost.  With a 40% cost savings over the JK Trucklites, I would recommend them to anyone.

At the beginning of this article, I stated that the Trucklites are worth every penny they are asking.  They are extremely good lights and I still maintain that position.  However, the Quadratec lights seem to be very good lights as well.  I think they are essentially $500 lights, they just don’t happen to cost that much.  I am sure part of the cost savings has to do with overseas manufacturing.  I myself try to buy American whenever I can but I understand some people simply don’t have the extra $200 to pay for that Made-in-the-USA stamp.  So, if you are in the market for a cost effective LED replacement headlight kit for your Jeep vehicle, look no further than the Quadratec Stealth LEDs.  You’ll be glad you did.

I leave you with some parting shots of the Stealth LED’s output: 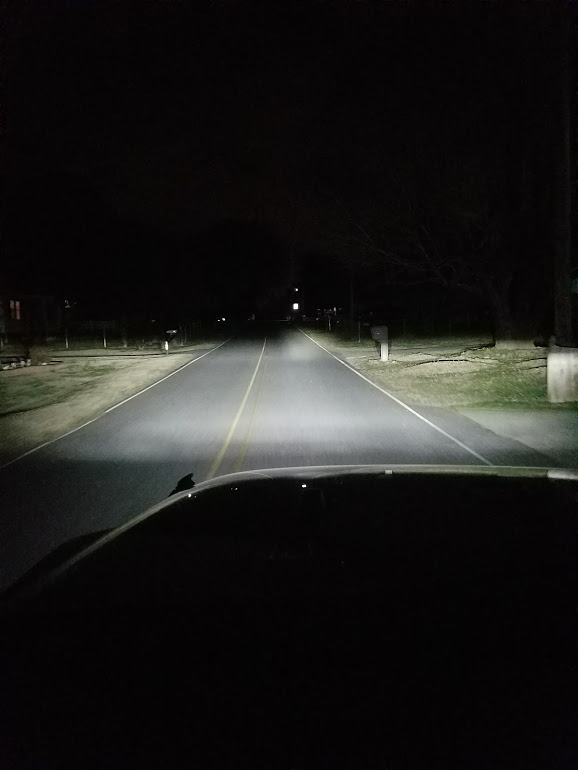 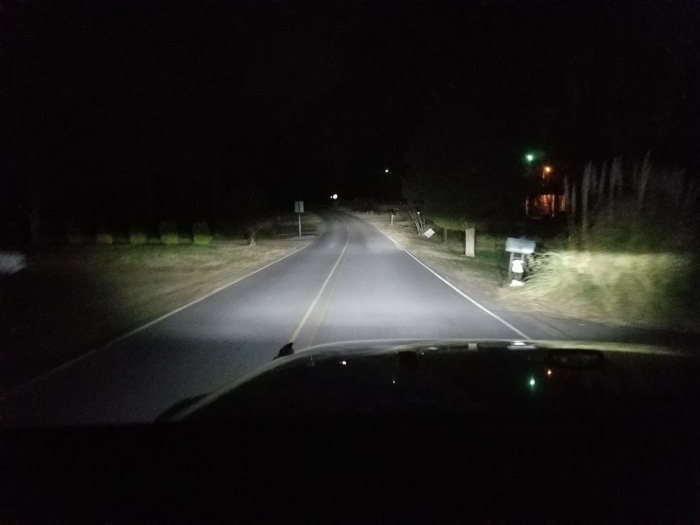